He Died for Me 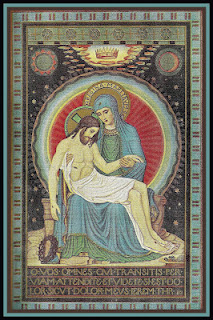 As Archbishop Fulton Sheen wrote once “Simeon had foretold that a sword her own soul would pierce; this time it came through the riven side of Her Son. Literally in his case, metaphorically in hers, it was a piercing of two hearts with one sword.”
Mary revealed to St. Bridget of Sweden some extraordinarily painful details in one of many private revelations which have been approved by the church as having nothing in them contrary to faith and morals.
She told her that “A man [the soldier, commonly known to us today as Longinus] came up and drove a spear so forcefully into His [Jesus’] side that it almost came out of the other side. And as soon as he drew it out, its point was all red with blood. The Heart of my beloved Son was so violently and mercilessly pierced that the spear split His heart in two. When I saw that my Son’s Heart had been stabbed through, I felt that my own heart was likewise pierced, and it was a wonder that it did not break.” 1

I found this beautiful image of Our Lady on Holy Cards for Your Inspiration .

A simple caption was posted that said,

May we all hold this image in our hearts as we wait the final hours.

1. Taken from Our Catholic Prayers
Posted by Daily Grace at 10:41 AM

A Happy Peaceful and Blessed Easter to you and your family.

Beautiful, Lisa! I love the holy card, and the simple but meaningful caption.

Happy Easter to you and your family!

God bless you both and may we all be filled with the awe and wonder of Our risen Lord, Jesus Christ.