Our Lives Are About Relationships 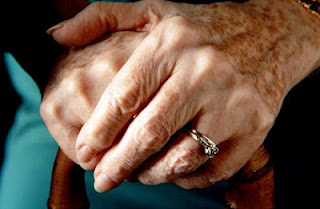 And stretching out his hand toward his disciples, he said, "Here are my mother and my brothers. For whoever does the will of my heavenly Father is my brother, and sister, and mother." Matthew 12:49-50

Shortly after I had become a lector at my local parish I volunteered to read on the Monday evening masses during  Lent.
I thought that I would add this little offering to my list of “things I would do for God” during these 40 days. Little did I know that in reality, He was going to do something  great for for me.

When that first Monday rolled around, I found myself a bit nervous, and I was watching the priest carefully after the opening prayers and such, so that I would walk up to the pulpit at the right time  when he took his seat.

As I stood up, I noticed a tall elderly woman, about eighty years old, in the first row.  She had the thickest head of blond curls I had ever seen, and she was motioning me with her arm, as if to say, “come on and hurry up”!
Apparently, she thought I needed some direction.

During the reading, I couldn’t help but notice that she was watching me intently. And when I walked back to my seat she smiled at me and nodded her head, as if in approval.

When the mass ended and those present started to leave, she walked up to me and introduced herself. Her name, she told me, was Dorothy; her friends called her Dottie. She too, was a lector at the parish and had been a former school teacher there, as well, for twelve years.

Proudly she told me that she went back to finish her college degree at the age of 55, after her husband had left her. I must have given her a look of surprise when she said this to me because she quickly added, “those were the best years of my life”…

We became instant friends. She told me she loved her grandchildren, bingo, romance novels, and the TV show “The Bachelor”…. She was truly a character!

It was about 4 or 5 months later that we finally got the opportunity to lector together at the 10:30 a.m. Sunday morning mass.

It would be the only time we ever read together.

Not long after that, on a Saturday, I got a call from one of the parishioners. Dottie had been playing bingo at a near by church the night before and had suffered a stroke .An ambulance had been called immediately and she was rushed to the hospital.

I grabbed my purse and jumped into my car, and drove down to the hospital as quickly as I could.

When I arrived, she was lying in bed with IV tubes in her arms and was hooked up to a heart monitor.  Her daughter was there too; the poor girl  looked completely frazzled.

The stroke had affected Dottie’s speech. Communication was very difficult. She desperately wanted to say something to me, but she couldn't. I told that everything was fine, that she didn’t need to speak. We could just enjoy our time there together.

With that, she seemed to relax and we spent the remainder of the time quietly being together. For me it was a gifted moment.

As the time came for me to leave, I kissed her on the forehead and said goodbye. "Get some rest" I said. " I'll be  be back in a couple of days."

Her eyes followed me to the door and she smiled at me. It was the most beautiful smile I had ever been given.

A couple days later, unexpected complications set in. After receiving the Sacrament of the Anointing of the Sick, Dottie passed away in the hospital. Her daughter and grandchildren were by her side….God had motioned for her to come up and join Him in heaven....There is no doubt that she is up there praying for all the people that had become her brothers, sister, mother.Yes,indeed,  she is praying for everyone that had become her family.

Our lives are about relationships. And, every day presents us with an opportunity to act with love and compassion to our brothers and sister.

God brings people in and out of our lives at different times and for different reasons. Every human person has something to share with us. Every person is gift.

And stretching out his hand toward his disciples, he said, “Here are my mother and my brothers. For whoever does the will of my heavenly Father is my brother, and sister, and mother.”Matthew 12: 49-50

This is a wonderful touching story Daily Grace. We often forget that the most important gifts we have are people. Rather than possessions.

I am praying for Dottie right now.

Thank you and God bless you Daily Grace.

What a gift God gave you in Dottie! I am sure that you were also a gift to her. God knows how to put us in the right places at the right time to meet the right people for the right reasons.

It's funny that I just read this post now. I found out yesterday that a childhood friend is in the last stages of leukemia and is not breathing on her own, probably will not make it through the week. She's 28, never graduated high school, and leaves 2 children, both of whom are with the parents of their respective fathers. Anyway, we were very close growing up, she lived across the street. And so I've been wondering what "it" is all about, if it just ends like this. But I do realize that life is about relationships. And our own lives are as much everyone else's as they are our own. Whether we want them to be or not, every person we interact with changes us somehow, and we change them.

This is such a heartwarming story!