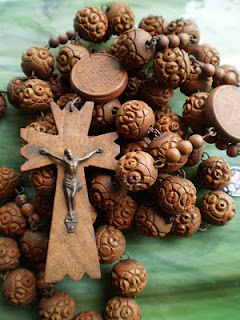 If you desire peace in your hearts, in your homes, and in your country, assemble each evening to recite the Rosary. Let not even one day pass without saying it, no matter how burdened you may be…….Pope Pius XI


“Among all the devotions approved by the Church, none has been so favored by so many miracles as the Rosary devotion.” Pope Pius IX

I can’t ever remember a time while growing up that our family went on car trip without reciting the Rosary. My dad, always the driver, would only be on the road for just a few minutes before mom would reach down for her purse. My younger sister Mary knew exactly what that meant and would immediately close her eyes pretending that she was asleep. So, as soon as I heard the beads rattle and mom say, “In the name of the Father, the Son, and the Holy Spirit”, I would loudly protest, “Mary’s not sleeping. She has to say the Rosary too!”

This seen played out each and every time we went on a trip. Who would have known that years later I would be carrying on the same tradition with my family, and they in turn would be offering me similar forms of protest!

Many miracles throughout history have been attributed to devoutly praying the Holy Rosary. Wars have been won, the sick have been healed, marriages have been saved and family members have come back to the faith, all because people have believed in the power of the Rosary.

I read a article yesterday about a young British soldier in Afghanistan,  Glen Hockton, who believes that the Rosary saved his life, just like his great-grandfather in WWII.

While Glenn was on patrol with his unit, his rosary suddenly fell from his neck. Thinking it was broken, he bent down to pick it up and realized he was on a landmine.

After 45 terrifying minutes, his colleagues managed to rescue him.

His great-grandfather Joseph ‘Sunny’ Truman also credited a rosary with saving his life in World War II. He was walking across a field with half a dozen of his platoon. He bent down to pick something up and was the only one to survive a sudden bomb blast. He had picked up a rosary.

For these men and many others, the Rosary truly was Our Lady's armor.

"Pray the Rosary everyday in order to obtain peace for the world and the end of the war." Our Lady of Fatima May 13, 1917


"Dear children! Today I call you especially now to advance against Satan by means of prayer. Satan wants to work still more now that you know he is at work. Dear children, put on the armor for battle and with the Rosary in your hand defeat him! Thank you for having responded to my call." BVM, Medjugorje August 8, 1985

I have started to pray the Rosary for almost a year now and SIGH....oh my goodness...I thank the Lord God Almighty for softening my heart to be open to this amazing blessing that He has given unto us through our Blessed Mother.

I may not always have the Rosary in hand, but you will find me MANY times throughout the day praying the Rosary silently. While washing dishes, walking the daycare children, pulling weeds, making supper...Peace that transcends all understanding will come upon my heart and mind as I just meditate upon our Lord's life...I thank Jesus SO much for giving us His Mother..She is just SIGH...well I could cry with joy!!

Angela, It is so nice to hear from you! The power of the Rosary is so amazing. I love to hear people share how about the way it affects their lives, and the peace this devotion brings to them. God bless

Amazingly beautiful as usual. How much I yearn for those days with my young children together for the rosary. The power of prayer is so great and praying together is so pleasing to our Lord

Sometimes, when I pray the Rosary I fall asleep. Do you think my Guardian Angel finishes the Rosary for me?

yes Victor!!
Beautiful post.Love the story of those soldiers.

Great story about your car trips and your sister's fake sleep! We used to pray the rosary in the car as a child, too. I just tried it with my family last weekend on a 3 hour drive to an amusement park. The car windows were open on the freeway and the noise made it impossible to hear so we gave up and I prayed it silently by myself. What a disappointment!

I have heard it before that our Guardian Angels will finish our incomplete rosaries for us-thank goodness for that! I'm sure I keep my Guardian Angel plenty busy finishing mine!

We prayed the rosary on road trips too. I probably did some fake sleeping myself. Now I pray the rosary each time I hit the road. Key for me is to keep the radio off. Gives us time to talk as a family too.

I pray the Rosary every morning on my way to work. I leave at 4:45, the traffic is light so I use the beads. On my way home I use the tape. When Our Lady asks...
When I'm home at night it's tough to get through that last rosary. Victor, She cradles us in her arms and, whether She finishes it for us or not, She must know our intention was good. Nice reminder, D.G.

I try and pray the Rosary every day in the car - like you did growing up. Except I use a recorded version on an ipod - I don't know if that counts as much ;)

Did you know you can pray the Rosary "live" online. I can't competently do the link here - but it's on my Blog (top right hand corner).

Victor, I did know that. I found the link on Shadowlands blog. I use it a lot! Thank you for bringing this up because I don't think I ever thanked her for it....So here is a thank you to her and to you!