Do Your Part and Trust Him To Do The Rest 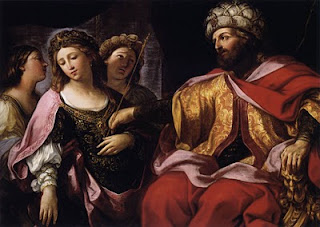 In the days of the beautiful Esther

You saved Israel by the hand of a woman.
In graceful obedience the young Hadassah came before Ahasuerus, mighty king. 1

Something in his eyes told me he was troubled, that he might be hurting. Yet, something in his demeanor told me that he wasn’t ready to talk about it; not right now. However, a woman knows her own very well and long after he had said goodbye I could still see the look in his eyes.

Heal within him all that is wounded, was my prayer for him.

Later that day, while driving home, the prompting of the Spirit stirred within my heart. “Bring your burdens to me and I will give you rest”, was my invitation from the Lord.

So I went to a nearby church and found the Lord waiting for me, exposed in the most Blessed Sacrament. Kneeling before Him, He welcomed me with the gift of peace. Gratefully, I unburdened my heart  on his behalf and the prayer of Esther came to my mind.

“My Lord, my king, you alone are God. Help me, who am alone and have no help but you” Esther, Chapter C;14

The image of Queen Esther and the thought of her graceful obedience filled my thoughts. Through fasting and prayer she interceded for the salvation of her people Israel. And God in his great mercy heard her cry for help and answered her plea.

As I meditated on this image, I knew the Lord was telling me to go and do the same. Be obedient, do my part and trust him to take care of the rest. I thanked Him for the answer he gave, and prayed for the grace to do His will.

My God, my rock, my all,
My trust is in you alone.

1,2   Miryam of Nazareth, Woman of Strength &  Wisdom, by Ann Johnson

Daily Grace,
A beautiful post. I often look to Esther and the other great Biblical women as a source of strength and courage. They trusted in God and so must I.
God bless.

This is really beautiful. You knew exactly where to turn. I'm going to memorize that quote from Esther and use it often, thanks Daily.
Andie

I was doing a little reading up on Esther's Story and found that the Hebrew Bible is significantly different than the Christian Bible version, and that God was not mentioned at all. Yet, along to the Torah, Esther is the most essential book in the bible because one of the lessons of Esther is that sometimes the presence of God is hidden.

I am glad you liked it! I miss your posts...When are you coming back?

Very inspiring. I needed that. Thanx.

Love this! So touching!

The Grace God gives women is not to be underestimated or undervalued, not by her least of all. She contains within herself a priceless treasure, of which she often has no idea. We are all princesses and queens in His eyes when we love and follow Him.

This brought tears to my eyes and much encouragement to my spirit..

booklady, Your words are such an expression of love. Thank you

Beautiful post. Sorry I have not visited in a while. God bless!

Thank you for taking the time to comment, I appreciate your kindness.