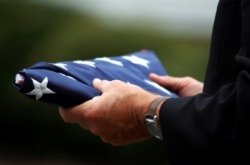 Jesus said to his disciples:


He just hadn’t been feeling well. Was it just his age, or was something really wrong with him? He went to his family doctor, but nothing serious was diagnosed. He was told to take it easy and was sent home.

His balance seemed off, then he started to fall.

He went back to see his doctor, and this time he was told that he had had a mild stroke. After treatment, he was sent home, only to experience another fall, then another. Things were happening fast now, and he was frightened.

He was admitted into the hospital and diagnosed with an aggressive form of brain cancer; it was inoperable. Struggling with the news, his family gathered around his hospital bed in prayer and support.

He was husband, father, grandfather, brother and uncle to many. He had served his country proudly in the Korean War. He had always been a loving man, a peaceful man, a family man. Suddenly he was a very ill man, with little time left.

As his pain grew stronger, his medication was increased making it difficult to communicated or even pray. But God in his goodness sent him many prayer warriors to keep vigil with him. They said the prayers he could not say, they brought his priest to administer the sacrament of the sick, and they spent time in Adoration for him. Through Christ, they brought him the peace he needed.

The doctor and hospital staff could do no more for him. Hospice care had been arranged and he was sent home to spend the time he had left with his family. Within a few days he was in the arms of Jesus.

"If I go and prepare a place for you, I will come again and receive you to Myself, that where I am, there you may be also.” John 14:3

In Memory of John Valencia

Email ThisBlogThis!Share to TwitterShare to FacebookShare to Pinterest
Labels: Peace

Such a beautiful reflection about a humble and peaceful man. Shows how precious life is and we do not know the day or the hour, all we really have is today. Also, the verse from John is a reminder that believing in a communion of saints we can ask for our family members who go before us to intercede for us and we too can pray for them. Nice post.

Johnny was a wonderful man. We were blessed to know him.

From the sound of this post:
Yes, you were very blessed indeed :)

Thanks Mary, we were indeed blessed.

Beautiful story DG - sad and yet we know that Jesus is and will be there with him.
Andie

Amen to that Andie!

Praying for John Valencia and family.

Thank you Victor. He was my son-in-laws father. He was a wonderful man.

Wonderful story. Thank you for sharing it with us. We will also pray for John and his family.