Divine Mercy Is For The Whole World

Pope John Paul II, both in his teaching and personal life, strove to live and teach the message of Divine Mercy. As the great Mercy Pope, he wrote an encyclical on Divine Mercy: 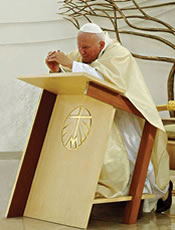 "The Message of Divine Mercy has always been near and dear to me… which I took with me to the See of Peter and which it in a sense forms the image of this Pontificate."

In his writings and homilies, he has described Divine Mercy as the answer to the world’s problems and the message of the third millennium. He beatified and canonized Sr. Maria Faustina Kowalska, the nun associated with the message, and he did it in Rome and not in Poland to underscore that Divine Mercy is for the whole world.

When Pope John Paul canonized Sr. Faustina (making her St. Faustina), he also, on the same day, surprised the entire world by establishing Divine Mercy Sunday (the feast day associated with the message) as a feast day for the entire Church. The feast day falls on the Second Sunday of the Easter season. On that day, Pope John Paul II declared, "This is the happiest day of my life."


Entrusting the World to Divine Mercy

In 2002, the Pope entrusted the whole world to Divine Mercy when he consecrated the International Shrine of The Divine Mercy in Lagiewniki, a suburb of Krakow in Poland. This is where St. Faustina’s mortal remains are entombed. The saint lived in a convent nearby. The Pope himself remembers as a young man working in the Solvay Quarry, just a few meters from the present-day Shrine. He also says that he had been thinking about Sr. Faustina for a long time when he wrote his encyclical on Divine Mercy. Further, the Holy Father has frequently quoted from the Diary of St. Faustina and has prayed The Chaplet of The Divine Mercy at the saint’s tomb.


Beyond the Life of John Paul II

Given all these connections to Divine Mercy and St. Faustina, is it any wonder that Pope John Paul II died on the Vigil of Divine Mercy Sunday (the evening before the feast day), which fell that year on April 3. It is also no surprise that the Great Mercy Pope left us a message for Divine Mercy Sunday, which was read on the feast day by a Vatican official to the faithful in St. Peter’s after a Mass that had been celebrated for the repose of the soul of the Pope.
Repeatedly Pope John Paul II has written and spoken about the need for us to turn to the mercy of God as the answer to the specific problems of our times. He has placed a strong and significant focus on the Divine Mercy message and devotion throughout his pontificate that will carry the Church long after his death.

I can't help thinking about JPII and Divine Mercy together. He truly is the Mercy Pope.
Hope you are having a blessed Mercy Sunday, DG.

I have always found it amazingly beautiful that Pope John Paul II died on the Vigil as he did. It is another pointer for us, I truly believe (and I don't say this lightly) from God... saying to pay attention, for His Mercy is a gift beyond our comprehension.

There seems to be common ground between St. Faustina and St. Therese of Lisieux. They both seem to be a humble, little way to sanctification - or, maybe, this is just something on my mind, at the moment.

Thank you for sharing this. I didn't know all of this background to the feast.

What we we do without mercy? I know I would be lost.

Nancy, You have such a beautiful way of stating things. Thank you.

I learn so much from my fellow bloggers. I always feel blessed when I can share something with them too!