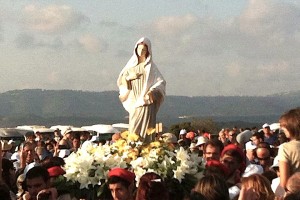 As Jesus was walking beside the Sea of Galilee, he saw two brothers, Simon called Peter and his brother Andrew. They were casting a net into the lake, for they were fishermen. "Come, follow me," Jesus said, "and I will make you fishers of men."   Matthew 4:18-19

Medjugorje visionary Vicka Ivankovic-Mijatovic’s public apparition on Wednesday was attended by Christians, Jews and Muslims alike, and also brought together the three Bishops of Galilee along with Orthodox priests when Mass was celebrated. Organizers estimate 13,000 people were present. 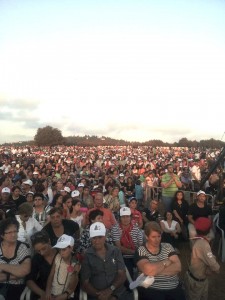 “It was the biggest man-made event in the history of Galilee. Never before have we had this gathering with Our Lady and this huge number of people” Charbel Maroun, the President of the Marian Movement of Lay People in Galilee, tells Medjugorje Today.

“Lots of people were crying of joy, crying because of the grace the experienced. They listened to what they heard about Medjugorje, and loved it. Thousands of young people were there. And one of my co-workers told me about a huge number of confessions” he says.

“There were a lot of Muslims. They liked it so much, they started crying because they were so happy to be present. There were also many members of the Israeli army. Never mind ethnicity or religious background, everybody was present and happy” Charbel Maroun reports.

“You could feel the Holy Spirit in the entire area. The people of Galilee will never forget this meeting. The majority of people here are weak in devotion and spirituality, and so for many it was the first time they saw such a huge manifestation of prayer.”

During Vicka’s apparition, the Virgin Mary asked the attendees to pray for the Church in Galilee.

We need to make a commitment.

In a message given Ivan and Marija in the context of a prayer group meeting, on August 19, 1988, Our Lady said the following:

“Dear children, I would like this to be a time of decision for you. Make a commitment to follow me, follow me! I wish to do so much, but I cannot do anything without you: your resolve is too weak.
So pray during this time dear children. Only through prayer can you receive the strength of commitment that you need. I am here to help you my children .

Today Our Lady asks for our commitment so that her plans in Medjugorje will succeed. In prayer today, let us ask Christ and the Blessed Mother to strengthen our commitment in following them with enthusiasm and courage.

Email ThisBlogThis!Share to TwitterShare to FacebookShare to Pinterest
Labels: Medjugorje. Our Lady

Thanks for an informative post. I haven't heard much about this apparition site in recent years.