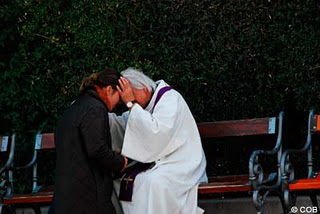 Souha’s most beautiful confession. A group came from the Middle East to spend a few days in Medjugorje, wanting to make a holy pilgrimage. Among them was Souha, a married woman whose husband is a doctor. She came without him because he was working.

Souha had a secret that left her without peace. Soon after her arrival, she went to see a priest from her group and confided to him that she had an abortion. The child that she was expecting was diagnosed with Down’s syndrome, and she and her husband did not want him. They decided together to have him removed from the womb and had an abortion performed. Her heart was still restless however and Souha asked the priest, “It’s not a sin, is it?” The priest answered, “But yes, my daughter, it is a sin! A grave sin! You must go to confession!”

Souha was not convinced and she shut herself within her denial. Yet she asked the Blessed Mother for a sign to know whether she should confess this act.

In the evening, at the apparition of the Gospa on the hill with Ivan, Souha was with her group. As soon as the Blessed Mother arrived, Souha unexpectedly bent over with her nose on the ground. She remained like this for a while and when she came back up after the apparition, her friends saw her crying. She told them, “Please call a priest, I must go to confession right away!”

I do not know what happened to her during the apparition, her friends respected her secret, but Our Mother acted.

In tears, Souha made the most beautiful confession of her life. Yes, she touched the horror of sin and it made her cry. She accepted God’s mercy towards her. Her inner peace was at last restored. Now she is free! What a contrast on her face! What light! She witnesses to her friends that she feels a deep joy, as never before in her life.

In Medjugorje, some pilgrims groups have a fine tradition. The guide suggests that each pilgrim receives the responsibility of praying for a particular person of the group during the whole pilgrimage. Thus the first or second night, each one must draw from a little basket the name of another pilgrim. That evening, out of the 150 people in the group, who received the name of Souha and the call to pray for her? A young woman with Down’s syndrome!

That same night, Souha’s husband called, and after hearing his wife’s story, tells her, “You know, I am calling you because I find it strange that you are over there praying to God, while I am here performing abortions. It is not right! Today, I have decided not to that anymore.” He also was crying over the phone. The whole day, he had the feeling that something was happening to his wife and he was ready to take this giant step professionally. Souha could not believe her ears.

This happened last August. Now Souha, her husband and their children are living differently, they put God in the first place. They practice the sacraments and go to Mass almost everyday. They give testimonies. After this memorable pilgrimage, they were wondering how to make reparation for such a past when they suddenly received a call from an orphanage needing help. Sisters were asking them to care for an orphaned child. They saw this as the answer from God, they were grateful to Him and decided to do everything in their power for the child.

And what has become of the aborted baby? In Medjugorje, Mary says of these unborn children, “They are with me”. This child is certainly praying for his parents and for all his little companions who, today, are programmed never to see the sun.

I am asking myself the question: did the baby really have Down’s syndrome? For I see more and more examples of wrong diagnostics: many mothers decide to keep their child whatever the handicap, and often, the child is born perfectly normal. Bizarre! To be meditated!

But God is wonderful! For this family, He changed evil into good. Now hundreds of children (perhaps even thousands) will never be aborted by this doctor who now fights for life.

*“Dear children, tonight I invite you to pray in a special way for the unborn children. Pray especially for the mothers who kill their children. Dear children, I am sad because so many children are killed. Pray that there are no more such mothers in the world.”
(To the Medjugorje Prayer group, 3- 03- 90)
Children of Medjugorje”  www.childrenofmedjugorje.com

Thank You Daily Grace for sharing this story with others.
God Bless,

What an amazing story! And people doubt Medjugorje is authentic?

This made me think about last Sunday when our Deacon gave a homily on abortion. Since we hear so little from the pulpit about this subject I was thrilled. I and others clapped when he finished, but there was many who where silent. This weekend I will spend at The Medjugorje Peace Conference ln Irvine CA.
I will keep the silent ones in my prayers

Thank you Colleen and Mary!

Our God is such an awesome God and there is no mother like our Mother Mary is there!

Thanks to you my anonymous mamma! See you at the conference!

Thank you for your kind comments on my blog today. So happy to meet you. This was an amazing testimony and I will definitely share it.

What a beautiful story of God's Grace and Mercy! Thank you so much for sharing this.

I have tears in my eyes. Thank you for sharing this.

I liked this story, and am glad it was posted, but I was not surprised. I scarcely know anyone who has gone to Medjugorje who has not had some miracle either there or shortly thereafter in their life --- as happened to me.