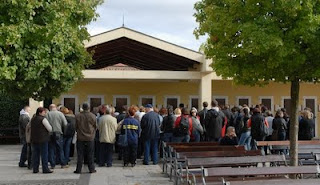 Today, Pope Benedict XVI highlighted what has become the most visible and fruitful witness to the Medjugorje phenomenon as an important aspect of new evangelization.

Speaking to a gathering of 1,300 priests and deacons in Rome, the Holy Father noted that the Sacrament of Reconciliation is essential to the life of faith and is closely associated with the announcement of the Gospel.

His Holiness said, “True conversion of hearts, which means opening ourselves to the transforming and regenerative action of God, is the 'motor' of all reform and turns into an authentic force for evangilization. During Confession, the repentant sinner, thanks to the gratuitous action of divine Mercy, is justified, forgiven and sanctified... Only those who allow themselves to be profoundly renewed by divine Grace can internalize and therefore announce the novelty of the Gospel.”

He added that new evangelization itself “draws life blood from the sanctity of the sons and daughters of the Church, from the daily process of individual and community conversion, conforming itself ever more profoundly to Christ.”

The Pope reminded his audience that, in administering the Sacrament of Penance, priests are instruments facilitating the meeting between mankind and God. The repentant sinner feels a profound desire to change, to receive mercy, to re-experience, through the Sacrament, “the encounter and embrace of Christ.”

“Thus you will”, the Holy Father added, “become collaborators and protagonists of as many possible 'new beginnings' as sinners you encounter.... New evangelization also begins in the confessional, in the mysterious encounter between man's endless plea... and the mercy of God, which is the only adequate response to humankind’s need for the infinite.” If the faithful are truly able to experience the mercy of Christ in the Sacrament “they will become credible witnesses of sanctity, which is the goal of new evangelisation.”

Medjugorje is often referred to as the “confessional of the world” because of the long lines of penitents that travel to the village from around the globe. Priests frequently report the quality and intensity of confessions at Medjugorje bear witness to the special grace present there. There are many reports of people returning to the Church and Sacraments after decades of absence.

Cardinal Christoph Schönborn, on his visit to Medjugorje two years ago, gave a catechises on Divine Mercy and said, “When you look at a place like Medjugorje, you can see a superpower of mercy. Many merciful deeds were born here or they were supported here.”

The local Franciscans are unable to cope with the large number of pilgrims seeking reconciliation and only with the help and assistance of visiting priests can the demands for the Sacrament of Reconciliation be met. Recently the parish added a further 36 new confessionals to the 25 existing boxes that stand outside the Church.

Alongside the outdoor confessionals in Medjugorje is the statue of St Leopold Mandic, the Cappuchin monk canonized by Pope John Paul II in October 1983 and known as the “Apostle of the Confession” because for forty years he would spend up to twelve hours daily, counseling and absolving thousands of penitents.

Dear children! In this time of grace, when God has permitted me to be with you, little children, I call you anew to conversion. Work on the salvation of the world in a special way while I am with you. God is merciful and gives special graces, therefore, seek them through prayer. I am with you and do not leave you alone. Thank you for having responded to my call. Medjugorje

Shared By: Blue Cross
In God's Company 2
Posted by Daily Grace at 1:13 PM

The amount of people who go to confession there is amazing. I would also had how devout they are to adoration is pretty incredible too. Good post, thank you.

Yay for Medjugorje! I can't wait to get there someday. I've also heard that the amount of people at confession is just unbelievable. I heard one priest say that even in a crowd of hundreds, and dozens of priests, he was hearing confession for 2 1/2 hrs!

I never really thought of Medjugorje as a center for confessions. Makes sense, of course! Thanks for sharing.

1 Is the Vatican any nearer on pronouncing its views on Medjugorje?

Yes, the amount of people that go to adoration in Medjugorje is also a powerful witness, isn't it!

Maira,
I agree with "YAY" for Medjugorje! Hope you get to go there too!

Michael, yes it is considered the center of all those returning to the faith.