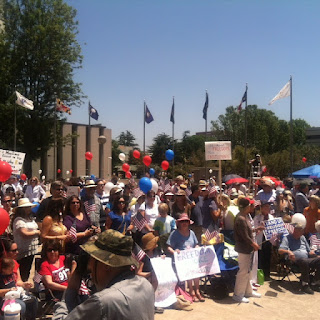 As the many flags waved throughout the Civic Center Plaza in Santa Ana, California, the crowd of about 2,000, both young and old, gathered to show their support for the Stand Up for Religious Freedom Rally.

While the music played familiar patriotic hymns from the stage area, a local Boy Scout troop presented the colors. Jack Hammet, a retired US Navy officer and Pearl Harbor Survivor lead us in the Pledge of Allegiance, and as we said the words, “One nation under God”, you could sense in all of us present just how meaningful these words were to us.

Jack shared  that while he was in the war, that he had fought the enemy to help preserve our freedom. As he spoke, he quoted a line from Britain’s Prime Minister Margaret Thatcher. She said “We had to fight the enemy without….Now we are fighting the enemy within. It is more difficult to fight, but just as dangerous to liberty...” What a fitting statement for our fight today for religious freedom.

He ended his talk by reminding us of what he was taught in Pearl Harbor, “Keep America alert”.

A letter was later read to us from Pablo Jose Barroso, producer of “For Greater Glory”, a wonderful film that is out in theaters right now. Pablo reminded us that we need to be the Cristero’s of today and stand up for the right of religious freedom in America through our voice and our vote.

Renee Bondi, a popular inspirational speaker, author and recording artist lead us all in,  the song “America the Beautiful”. And, she asked us to pay close attention to the second and third verse:


O beautiful for pilgrim feet
Whose stern impassioned stress
A thoroughfare of freedom beat
Across the wilderness!
America! America!
God mend thine every flaw,
Confirm thy soul in self-control,
Thy liberty in law!

O beautiful for heroes proved
In liberating strife.
Who more than self their country loved
And mercy more than life!
America! America!
May God thy gold refine
Till all success be nobleness
And every gain divine!

As the rally came to an end we were told by Orthodox Rabbi Fisher that religion should not be touchable by the government, that this is everyone’s fight. 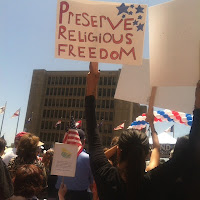 I am glad that I was able to attend this rally and ask each of you to continue to pray for our great country and for the right of religious freedom.
Posted by Daily Grace at 4:17 PM

Thanks for sharing about California's rally. We had one here in NJ today as well. Unfortunately I couldn't male it to the capital today, but am joining everyone in prayer. Truly, may God mend our every flaw!

Prayers are very important Karinann.
Thanks for visiting and God bless

Thanks for sharing. Wasn't it nice when God was a part of our country's songs?