Come Out And Make A Stand 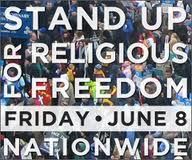 June 8, 2012, marks the 223rd anniversary of  the day our Founding Father James Madison introduced the Bill of Rights, with its guarantee of religious freedom, to the First Congress.

Madison's original proposal for a bill of rights provision concerning religion read: ''The civil rights of none shall be abridged on account of religious belief or worship, nor shall any national religion be established, nor shall the full and equal rights of conscience be in any manner, or on any pretence, infringed.'' 1 The language was altered in the House to read: ''Congress shall make no law establishing religion, or to prevent the free exercise thereof, or to infringe the rights of conscience.'' 2 In the Senate, the section adopted read: ''Congress shall make no law establishing articles of faith, or a mode of worship, or prohibiting the free exercise of religion, . . .'' 3

As most of us are well aware, on January 20, 2012 the United States Department of Health and Human Services (HHS), under Secretary Kathleen Sebelius, unveiled a new policy which has come to be known at the “HHS Mandate.”
The new Mandate would requiring nearly all private health insurance plans to include coverage for all FDA-approved prescription contraceptive drugs and devices, surgical sterilizations and abortion-inducing drugs—drugs that interfere with implantation in the womb and therefore destroy the life of a human being in the earliest stage of development.

The Pro-Life Action League and Citizens for a Pro-Life Society are pleased to announce that the next Stand Up for Religious Freedom Rally will take place on Friday, June 8, in cities and towns across the United States.

Stand up for Religious Freedom
The First Amendment Overview
Posted by Daily Grace at 9:30 AM