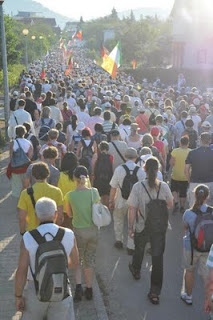 An estimated 100,000 pilgrims from more than 100 countries attended Masses in more than 20 languages, bought a record number of books and restaurant meals before spending the night in a record number of local hotel and pansion beds, if not on lawns and parking lots. The 30th anniversary of the apparitions in Medjugorje set new records in almost every conceivable way.

Throngs of pilgrims in Medjugorje on Friday. Photo: medjugorje.hr The apparitions in Medjugorje can neither be limited by time, nor by space, the Croatian newspaper Slobodna Dalmacija reports from the celebration of the 30th anniversary of the Virgin Mary’s apparitions. Nor by any kind of number, one could almost add.

According to the newspaper Vecernji List, a record number of just about 100,000 pilgrims make sure a number of other records are also being broken these days: Number of countries the pilgrims have arrived from (more than 100 on all continents), and number of languages in which Masses are being celebrated (more than 20).

The great influx of pilgrims sets new secular records as well. This goes for the number of souvenirs, books and meals sold in restaurants and stores, and the number of rooms rented in local hotels and pansions.

“The days are busy not only for the hotel facilities and rooms in private houses, but also for lawns, streets and parking lots where pilgrims from all over the world and of all races and nations are resting and sleeping, tired but satisfied”, Slobodna Dalmacija also reports.
June 25, 2011 Message to Marija

"Dear children! Give thanks with me to the Most High for my presence with you. My heart is joyful watching the love and joy in the living of my messages. Many of you have responded, but I wait for, and seek, all the hearts that have fallen asleep to awaken from the sleep of unbelief. Little children, draw even closer to my Immaculate Heart so that I can lead all of you toward eternity. Thank you for having responded to my call."


I would like to thank Ed Sousa, Sr from "In God's Company 2", for sharing this post with me. Ed "pays it forward" for Our Lady everyday of his life.

Email ThisBlogThis!Share to TwitterShare to FacebookShare to Pinterest
Labels: Sharing Grace by Others

What a beautiful out pouring!

Thank you for sharing this post. I remember so fondly my time there, and the many blessings which flowed from there. I wonder if the family we stayed with are still there, and if they still share there home as graciously as they did with us.

I don't know the truth of what God puts in the hearts and minds of others, but I can see the truth of His fruits: the conversions, the miracles, and the love which flows from this place. I thank Mary for having called me to visit this place, and for never giving up on me.

Wow ... that's some anniversary gathering! Thanks for highlighting In God's Company 2 on "Pay It Forward". There's a huge list of resourceful links posted over there too.

Ed is amazing! And one of the fruits of Medjugorje for Ed is that his son, Ed Sousa Jr. became a priest after a pilgrimage to Medjugore!Praise the Lord!!!

Hi, I came across your blog link from Holly's A Life-Size Catholic Blog and came over to say hello. I went to Medjugorje back in 1998 and remember it well. What a blessing Our Lady has been for so many! www.rosarymom.blogspot.com

I am always homesick for Medjugorje!
Like you I feel so blessed to have gone there.

May God bless you.

Thank you for stopping by Noreen. I hope to see you again.

Thank you for this wonderful post...I am stopping by from Holly's blog. Oh yes, when I have a hard day, I can always go to Medjugorje in my mind:D (And heart of course). I was blessed to go on pilgrimage there 2 years ago. One of these days I need to post my thoughts and photos! All For Jesus, through His Most Holy Mother.

I look forward to read your posts about Medjugorge. Ed Sousa, Sr posts some wonderful things about Medjugorje on his blog "In God's Company 2". You might like to visit him. I have his link on my sidebar.

Thank you so much for stopping by my blog. God bless

Have you heard if the Our Lady apparitions have been approved by the Catholic Church?