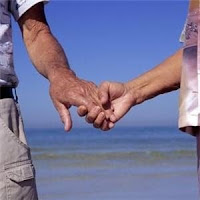 They had both been complaining about each other for years. It was often a complaint about small things that they had let grow into big things. But, it was always about something.
“I’ve told him many times” she would say, “but he just doesn’t get it”. He would shake his head as he told his friend, “You can’t tell her anything, she never listens”.
And so it went. They had both become so sure that it was the other one that was wrong; they became deaf to one another.
Sadly, this situation happens all too often to many of us in married and family life. We think we are right and our pride takes over. As we close our ears, we close our hearts.
In today’s gospel reading, Jesus looks up to heaven and groans, and said "Eph'phatha," that is, "Be opened." (Mk 7: 34). He is referring to the deaf man that He has just healed. But, the Lord is calling each of us to be open as well.
Prayer: Lord, open my ears to your word and my heart to forgive.
Posted by Daily Grace at 10:36 PM

This was great Mom. I love you!
Jen

It is easy to fall into the not-listening pattern, isn't it? Listening is NOT a passive activity. It is an active one and done, well, it is very difficult.