He Abandoned Himself Completely to Mary. 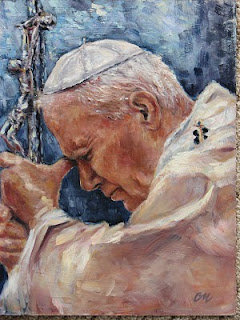 I came across the most inspiring article today regarding Pope John Paul II and  I just wanted to share it with you.
God bless you.
By Susan Brinkmann, OCDS
Staff Journalist   for Living His Life Abundantly, Women of Grace

The physician who treated Pope John Paul II throughout his life said the dying pontiff refused all pain medication and, at the end of his life, abandoned himself completely to Mary.

The Catholic News Agency (CNA) is reporting that Italian physician Renato Buzzonetti, who served as Pope John Paul II’s personal physiciam from 1978 until his death, described the pope’s heroic suffering during a recent interview with L’Osservatore Romano.
When he was first diagnosed with Parkinson’s disease in 1991, Buzzonetti said he reassured the pope that “no one ever died” from a shaky hand. But as the world watched, the disease gradually worsened.
“The Pope’s life was more complicated later because of the painful joint symptoms that were particularly intense in his right knee, which prevented John Paul II from standing up and walking briskly,” Buzzonetti said. “These were two symptoms that, put together and intertwined, made it necessary for him to use a cane and later a wheelchair.”
Despite the pain, the Holy Father “never asked for sedatives, not even in his final stages,” he said. “It was above all the pain of a man who was enclosed, prostrate on a bed or in a chair, who had lost physical autonomy. He couldn’t do anything by himself, and eventually he was completely physically disabled: he could not walk, he couldn’t speak other than with a weak voice, his breathing was labored and short, he ate with increasing difficulty.”
Buzzonetti spoke about the final days of the pope’s life, when he was forced to perform a tracheotomy that would take away his ability to speak.
“Upon getting himself up after the anesthesia, after having given his consent, he realized he could no longer speak,” Buzzonetti said. “Suddenly he found himself facing an extremely difficult reality. On a little chalkboard he wrote, ‘What have you done to me. Totus tuus (totally yours)’.  It was the realization of the new state in which he had fallen, suddenly exalted by the act of trust in Mary.”
Buzzonetti said the last few days with John Paul II were especially intense. “I felt extremely tense because of the great responsibility that was on my shoulders … My colleagues and I were aware that the disease was … in its final phase. Our battle had been waged with patience, humility and prudence, which was extremely difficult because we knew it would end in defeat.”
The death of Pope John Paul II “was the death of man divested of everything, who had lived through times of struggle and of glory and who was interiorly stripped of everything to meet the Lord and return the keys of the Kingdom,” Buzzonetti said. “At that hour of pain and astonishment, I had the sensation of being on the shores of the Sea of Galilee. The story was reset, as Christ was preparing to call the new Peter.”
http://www.womenofgrace.com

That was a beautiful article. I miss him so much. He was such a beacon of light, and truly a father figure for us all.

Thank you Abbey, I feel the same way you do! I miss him so much!

What an amazing story this is! Pope John Paul II is a saint for our times, that's for sure. A great saint!

It is amazing that even now Pope John Paul II still inspires and challenges us to give more of ourselves to the Lord! Have a blessed weekend!

What an amazingly heroic man and a great blessing and example to us all! Thanks so much for this post!

This is a beautiful story. I have always believed that not only did John Paul II teach us how to live, he also taught us how to die.
Thanks for sharing this.